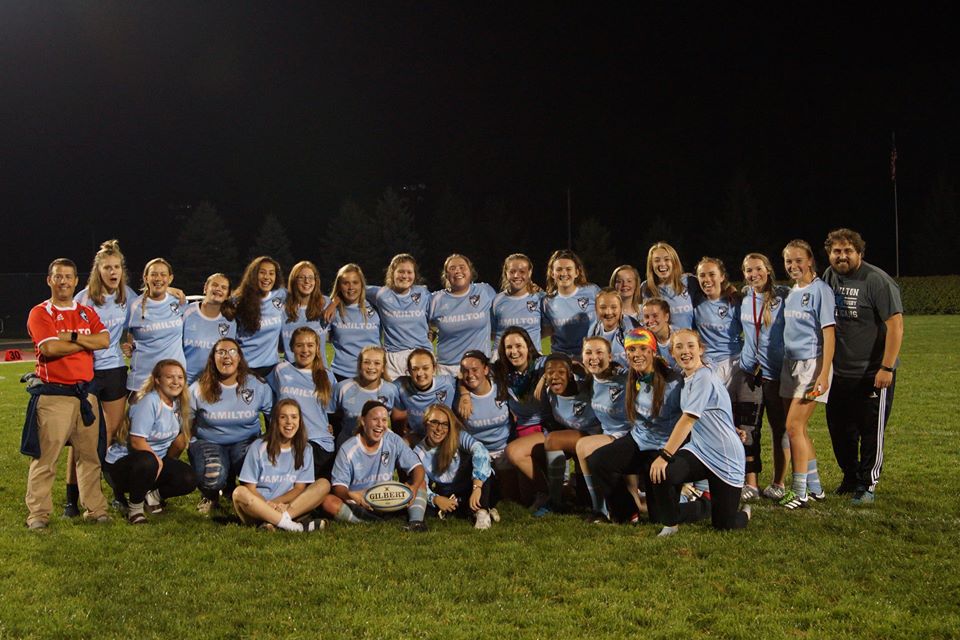 Sussex, WI–It would be hard to imagine a more important friendly game for the Hamilton Rugby Football Club than the one that took place on Friday night after the varsity football game. Minutes after the football team struggled in a defeat to Catholic Memorial, the Harriers took the field to find redemption against a Catholic Memorial side that are not only the reigning state champions, but they also finished 2nd at last spring’s national tournament. Hamilton was playing a rugby game on Grove Field for the first time in school history.  For many in the community, it was their first look at the sport of rugby. While a number of families left early, the student section remained to offer they full-throated support. Anyone who stuck around, saw an exhilarating game of rugby, and more importantly, an improbable win by the home side, as Morgan Price broke through the CMH back line to put her team ahead 12-5 as the clock expired.

The fans had a lot to cheer about. The first half delivered great ball movement and competent tackling and rucking. The entire game was played at a breakneck pace with both teams matching each other’s speed and strength. Alex Werra had a long run early that almost gave Hamilton the opening score, but for the most part, the first half was a war of attrition. At the end of the half, CMH was able to work the ball inside the 22, and a strong run off a ruck put the Crusaders up 5-0 on the final play of the half.

Hamilton substituted Jessie Endries for Hannah Pfersch in attempt to add some strength to the speed of the line, and the move paid off as Pfersch was instrumental in driving the ball close enough where Elise Rades could utilize a scrum half pick off a ruck to run in a try on the weak side to level the score, 5-5.

At the end of the second half, a long run started by Mykayla Pena created an odd-man rush as she was able to cut around a CMH player. The team worked the ball down the line to Morgan Price, the school’s back-to-back state champion in track and field, who found a hole and ran it in for the first try of her career. Rades converted the kick as time expired, putting the team up 12-5.

As the student section stormed the field, it became obvious that this, albeit a friendly, was one of the biggest moments in the team’s young history.