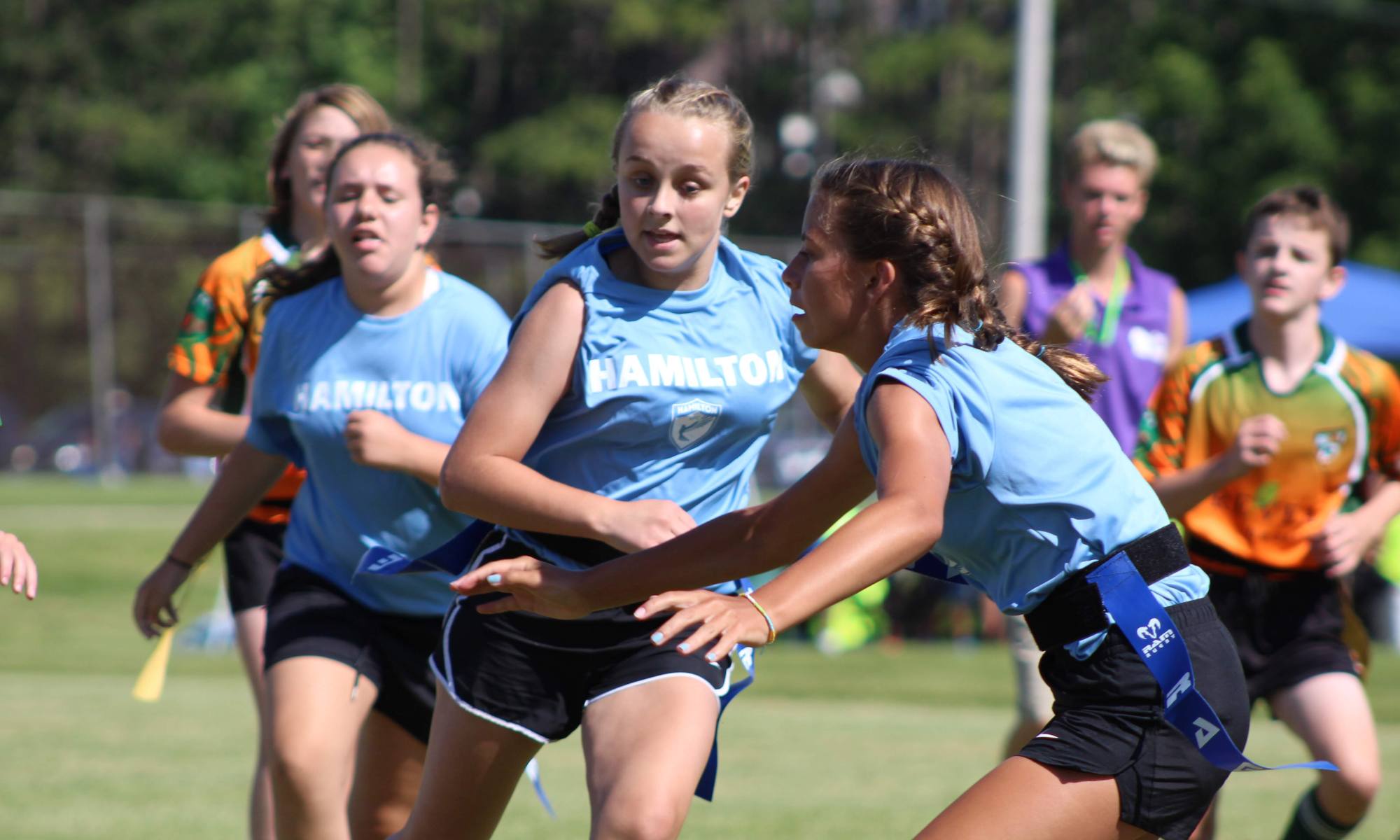 Brownsville, WI–It was another beautiful day for rugby as hundreds of the state’s best tag rugby players descended onto the small town of Brownsville: population 581. The girls faced some tough competition, including the two teams that would play for the championship. While their 1-4-1 record on the day seemed like a step backward from their previous tournament at Lakefront 7s, the team played much better on both sides of the ball against much stiffer competition.

vs. Waukesha The team came within one meter twice in a row to open play against Waueksha, but they had their fifth flag pulled before they could set it down for the score. Waukesha was able to convert on their first two possessions, but Macey St. Louis was able to get one back running the ball in with no flags left to give. While the team finally broke through on offense, they struggled to contain the Waukesha attack, allowing four more tries before St. Louis added another. Waukesha would add one more and Meghan Rank would close out the scoring in a 7-3 defeat for Hamilton.

vs. Embarrass River Hamilton got off to a strong start on the back of dominant performances by the Rank twins. Meghan a had great steal for a try and made a pair of great offloads to help Rachel to a first-half hat trick. Embarrass was able to get one back to start the second half after a series of missed tackles, but Meghan Rank broke the Embarrass line for a score and Jenna Mendoza went on a long run before offloading the ball to Meghan for her third try of the day. Hamilton’s 6-1 win was their first and only on the day.

vs. Fond du Lac Hamilton didn’t have much of answer on either side of the ball for what the eventual tournament champion, Fond du Lac, was bringing in this game. Rachel Rank was able to get an impressive line break in a first half that saw Hamilton fall into a 4-1 deficit. The team settled down on defense and only allowed a pair of tries in the second half, highlighted a great fifth flag pull by Jenna Mendoza. The team was defeated 6-1.

vs. Green Bay Facing the team that would lose in overtime in the championship game, the team struggled to find their offense, despite holding the strong Green Bay attack to, a respectable, five tries. Lilly Hagen scored her first try of her rugby career and was the only score in a 5-1 defeat.

vs. Wauwatosa Lilly Hagen continued her scoring streak by getting the first try of the game. A great tackle by Alexis Lykins in the try zone wasn’t enough to prevent an offload for a score and a three-try avalanche to end the half. Despite being down 3-1, the team didn’t get disheartened and rallied when Emma Kennedy scored the first two tries of her career by picking off a pass for a score and collecting an errant pass off the ground for another. Buoyed by her performance, the team added another try thanks to great runs by Alayna Restivo, Kennedy, and Jordy Fryda who was awarded the try, the first of her career. Wauwatosa would strike back to even the score 4-4, but a great offload by Kayden Vandermolen to Fryda put the team ahead with just a minute remaining. Wauwatosa drove down the field sending an errant pass to the ground, a Wauwatosa player went on their knees to pick it up and pass it to a player for the try that probably shouldn’t have counted, and the game ended in a tie.

vs. Waukesha The team had no answer for a pair of 8th grade boys who made excellent runs and had had great interplay among themselves. They combined for seven tries. Another great offload by Kayden Vandermolen to Jordy Fryda was Hamilton’s only try as they lost this one 7-1.