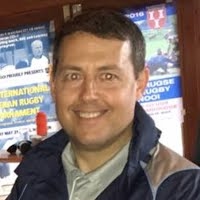 Sussex, WI–In what can only be defined as a huge step forward for the fledgling Hamilton Rugby Football Club, the team has added to their staff a prominent name in Wisconsin rugby, as Vic Drover was named the team’s interim backs coach.

Drover comes to the team with nearly 25 years’ worth of experience in rugby. His career is highlighted by a five-year stint as the state’s highest ranking rugby executive when he served as the President of the Wisconsin Rugby Football Union (2010-2015), and he is currently the executive director of the Lakefront 7s, and the president and co-founder of the Barbarians Athletic Club, which features the state’s only D-1 men’s rugby club.

Drover grew up in Canada, starting his rugby career in 1993 with the Vandals RFC as a scrum half in Newfoundland before moving to Alberta in 1996 where he played with the Druids RFC. In 2002, Drover relocated to New York where he co-founded, coached, and captained Suffolk RFC, a D-3 program. He finished his playing career in Milwaukee with the Harlequins RFC in 2011.

Drover makes a living as an IT professional and has two daughters in the Hamilton School District.

With this addition, Eric Steinman, currently the team’s “assistant coach,” has be reassigned to “head forwards coach.”