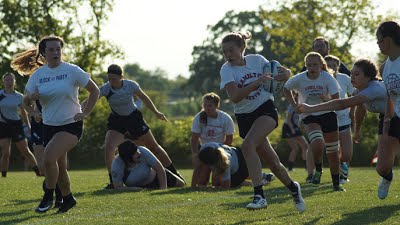 Menomonee Falls, WI–Last night Hamilton Rugby Football Club held a joint practice session against Kettle Moraine at the Midwest Orthopedic Sports Complex, which was followed by a scrimmage of two twenty-minute halves. Hamilton defeated Kettle Moraine 31-10 on the back of Captain Hannah Pfersch’s stellar performance, as she scored the first hat trick in team history.

Hamilton overcame some big odds in the scrimmage as the coaching staff was quick to pull girls from the game even with small injuries because it was just a scrimmage. Because of some of the bumps and bruises during the initial practice, Hamilton started only 13 girls and lost another by the second half. Kettle Moraine was playing with an additional girl, but many of the girls on their team were new to rugby by just a few weeks.

Alex Werra returned the opening kick-off for an instant try, and Sarah Michalski hit the conversion to give Hamilton an early 7-0 in the first minute of the game. Taylor Fryda and Pfersch added another pair of scores as Hamilton jumped to a 19-0 lead.

With Hamilton a bit gassed from trying to cover their four player deficit, Kettle Moraine seemed to close in on the lead, by scoring tries of their own without conversions. But minutes after each of the scores, Pfersch punch in a pair of tries to immediately get the points back.

The practice before the scrimmage had both teams practicing their lineouts, scrums, penalties, and kickoffs against each other with coaches on the field. In the end, it was an excellent opportunity for both teams to learn the game before the start of the regular season.

–Hannah Pfersch was named captain for this game. While Taylor Fryda and McKenzie Kolesari were named alternate captains.
–Maddie Lang and McKenzie Vang left the practice early due to knee-to-knee collisions.
–Cara Bailey did not practice in the scrimmage due to a non-rugby related injury.
–All 15 Hamilton players were playing in their first rugby contest.
–Sarah Michalski went 3 for 3 on conversions from the center.
–Alex Werra went 0 for 2 from the much harder to score outside conversions.