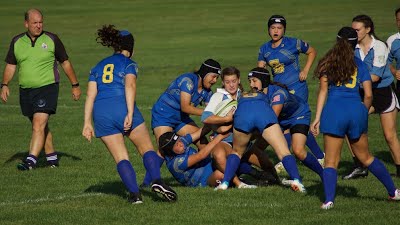 The first away game became the first loss in team history, as the sides played four 15-minute quarters against the reserves of a club who recently placed 4th in the nation and have also finished second in state each of the last six years.

Comparatively, Hamilton was playing just their second game in team history. Despite the lack of experience, Hamilton held Catholic Memorial to a 0-0 tie in the first quarter. They also held their own in scrums, lineouts, and rucks, doing well enough to even steal back possession in some cases.

But Catholic Memorial got on the board quickly in the second quarter, as they added three tries and conversions, and entered halftime with a 21-0 lead.

In the second half, Hamilton’s inexperience and fatigue was exploited as CMH took advantage of times when the team sat too far back on rucks, didn’t attack the ball on defence as one unit, and failed to cover players on the outside.

Catholic Memorial added five more tries and a conversion, mostly on long runs, to help themselves to 48-0 win to open their season.

Even though the scoreboard seemed to indicate otherwise, Hamilton put together an advanced performance for a team of their experience level, and coaches from both teams were impressed with the level of play Hamilton displayed despite being a new team.

–In a show of great sportsmanship and in recognition of Hamilton’s inaugural season, CMH awarded the game ball to Hamilton’s Hannah Pfersch.
–Today’s captain was Lauren Leonardi and the assistant captains were Sarah Michalski and McKenzie Vang.
–Maddie Lang did not play due to a lower body injury sustained in last week’s scrimmage.
–Cara Bailey left the game early due to issues related to asthma and Mia Leukert left the game briefly after she was hit in the throat.
–The referee for today’s game was Dan Chanen.