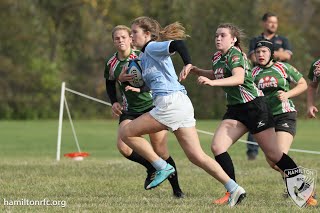 But Hamilton didn’t give up. They used a series of fantastic passes and offloads to close the lead to 12-5 after an Alex Werra try. Lauren Leonardi immediately returned the ensuing kickoff and within minutes Hamilton had tied the game.

Five minutes later, Werra went on a long run and dragged a pair of Fox Valley players into the try with her to put the team up 19-12 going into half.

Fox Valley showed no quit and five minutes into the second half when their #8 ran almost the length of the field to tie the game 19-19.

The momentum seemed to be shifting in Fox Valley’s favor, but before they could capitalize on that shift, Hamilton scored three tries in a ten minute span.

Mackenzie Kolesari used a tough run find the corner of the try, Hannah Pfersch blasted through the line for a try from about 15 meters out on a penalty, and Jessie Endries dove in for her first try of the season after picking up a loose ball near the try line.

Fox Valley’s added another score right before the final whistle, but it wasn’t enough.

Hamilton now advances to the 5th place game next Sunday (10/29) at 3:00pm at the Milwaukee County Sports Complex. Admission is $5 (players, coaches, grandparents, and children under 6 are free).

–Alex Werra left the game with bruised patella. She will be out at least six weeks.

–Tierra Laurishke made her career debut and almost scored on her first touch of her career.

–After missing many months with a knee injury, Maddie Lang made her official rugby debut in the second half.

–Alex Werra and Chloe Miller took converstions for the team since Sarah Michalski was out with an injury.

–Five of the team’s seven potential wings were missing due to prior engagements and injury. All are expected to return next weekend.