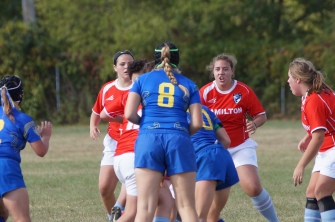 Hamilton in a game against CMH in 2007. Photo courtesy of Angie Kolesari.

Waukesha, WI–Hamilton will face Catholic Memorial in the State Championship Semi-final at Minooka Park on October 19th at 4:30pm.

Hamilton finishes their second regular season with a 3-1 record, a improvement on their inaugural season when they went 2-2. That was good enough for a second place finish in the Jeff Noe Conference.

CMH is expected to finish 4-0 this season with one game left to play this weekend. Either way, they will win the Tony Oliver Conference and earn the right to host Hamilton in the first playoff game.

Catholic Memorial is the reigning state champions and defeated Hamilton in a 80-minute pre-season game, 68-0. Hamilton did defeat CMH in a exhibition 7s match on September 15th after the varsity football game by a score of 12-5.