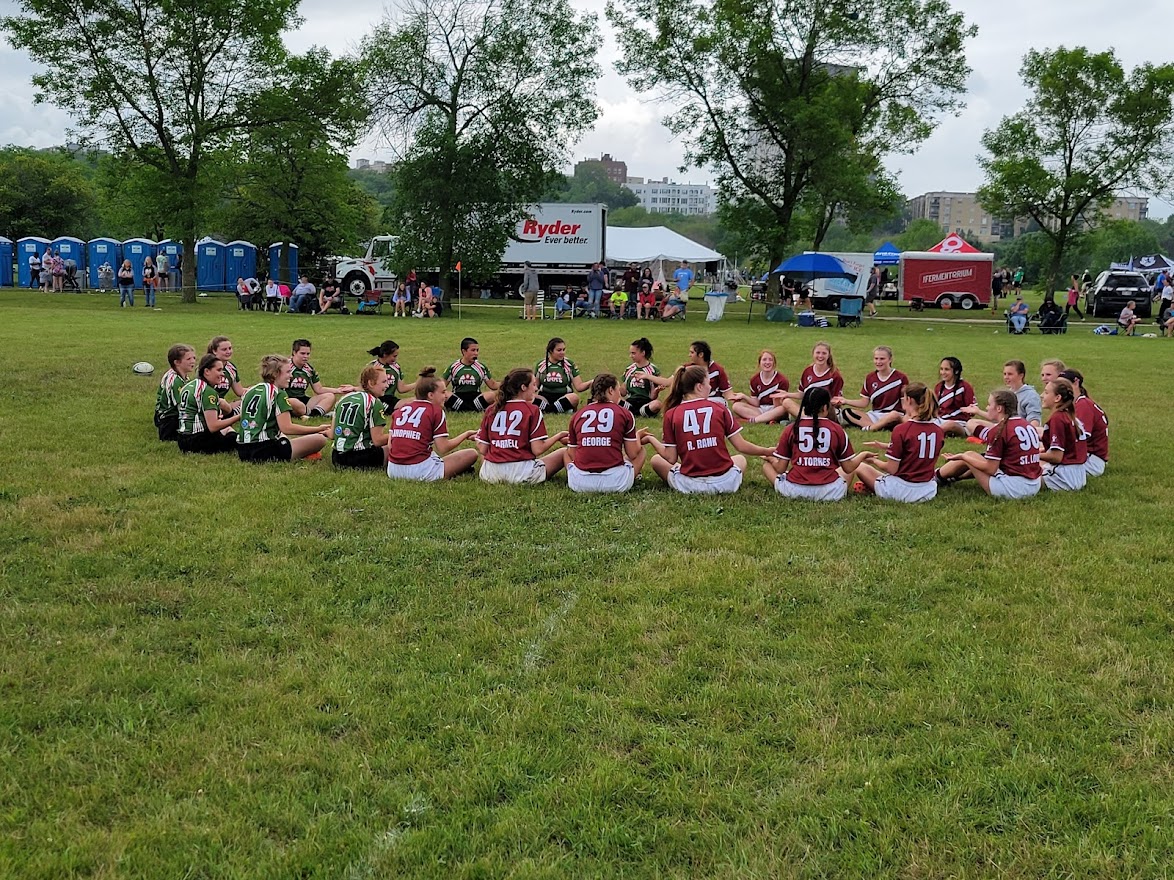 Celebrated that State Championship in 7s

With their Division One State Championship win in 7s this past spring, the Chargers will continue their reign as state champions that started back in 2019. They will look to defend the title in the spring of 2022.

Three Chargers (Meghan Rank, Ronny Ruedinger, and Savannah Landphier) were selected to join the Wisconsin All-Stars team and travelled to Indiana to play in exhibition contests.

Lakefront 7s is the largest summer rugby sevens tournament in the country, and while Hamilton has perfromed well at the event (5-2 historically), they had never won a playoff game at the tournament. At the 2021 edition, Hamilton went undefeated in group play beating the Chiefs, Illinois 15s state champs in 2019, and MadTown Furies, Wisconsin D2 7s state champs in 2021. The team also defeated the Chargers, Indiana 15s state champs and 2018 7s state champs, to win their first playoff game at Lakefront 7s. They were respectfully defeated by a Wisconsin select side team in the finals that featured players from across the state, many of whom were graduated and heading to the country’s best rugby colleges.

For the first time in team history, a group of Hamilton RFC alumni joined together to compete in a women’s tournament. This year’s Lakefront 7s squad featured Hannah Pfersch (’20), Morgan Price (’19), Jessie Endries (’20), Taylor Fryda (’20), Coach Mac, Sydney Raymond (’19), Calla Dane (’19), Alex Werra (’19), Cora Kuhlenbeck (’21), Madi Martinez (’21), and Elise Rades (’19). The team narrowly lost their first game, won their second game, and lost to the tournament champions, the Iowa Hawkeyes, to round out their group play. This will continue to be an annual event. The alumni team uses the original logo and baby blue jerseys and was coached by Barry Holloway. Check out the alumni page for more information

The team inducted three players and two builders as Hamilton RFC’s first hall of fame class. Hannah Pfersch, Elise Rades, and Morgan Price were inducted as players and Katie McNeil and Barry Holloway were inducted as builders. All alumni who attended Lakefront 7s, as a player or fan, were eligible to be inducted. The alum’s accomplishments were shared with the members of the current team and the current team voted if the alum had accomplished enough to be inducted into the hall. The top three vote getters for players and top vote getter for builders are inducted yearly. Two builders were inducted this year due to a tie in voting. In addition, Hannah Pfersch had her number 75 retired after serving as team captain for three seasons and Calla Dane had her number honored for helping start the team. Check out the Hamilton RFC Hall of Fame

The Tag Rugby Academy grew to include girls at Templeton and Silver Spring school. The girls played in four tournaments in June and July. The general manager of the team was Hamilton RFC alum Hannah Pfersch, and the players were coached by current high school players Alexis Lykins, Savannah Lanphier, Lilly Miller, and Macey St. Louis. The Hamilton Tag Rugby Academy is open to 5th-8th grade girls in any district. More info about the program can be found here.

Hamilton back Izzy Niebler coached the Menomonee Falls 3rd-4th grade team this summer. Izzy choose to help out the Falls program because she spent seven years of playing flag rugby for them, starting in 2nd grade. Look at those pics of baby Izzy! Izzy’s 3-4th grade teams went a combined 15-2-1 in their first four competitions, winning Lakefront 7’s, Oshkosh, and West Bend tournaments respectively. She also finished the season with a tournament win at Cottage Grove. Congrats, Izzy!

With the potential the of losing Coach Holloway as he pursues a career in educational leadership, the team has been put in the loving hands of Coach Katie “Mac” McNeil. Coach Holloway will still serve in an advisory role that will see him helping with recruiting, running drills at practice, and helping Mac transition into taking over the administrative work. Coach Mac has been with the team since 2019.