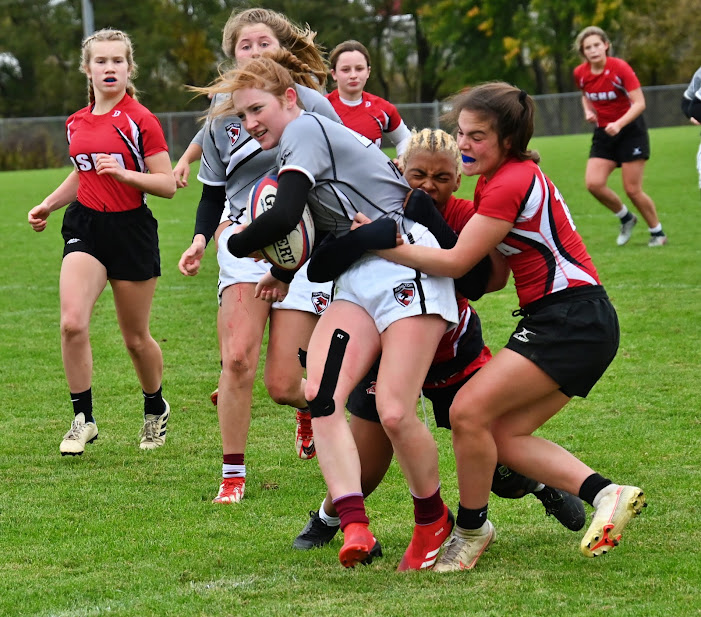 Sussex, WI–Congrats to the following eight ladies who earned all-state honors this fall, which is a team record in one season. The previous team record was five in 2019.

Senior Ayana Phelps set a team record for most tries scored in a season (7), eclipsing Morgan Price’s (Class of 2018) record of six in 2018. Price also lost her hold on the record for most points in a season (36, 2018), as junior Meghan “Meggy Leggy” Rank used her kicking leg to score most of her 51 points this season. She single-handedly outscored three WGR teams: Kettle Moraine, Muskego, and Madison. Rank also set the team’s conversion percentage record, making 59% of her kicks (23/39). The previous record was held by Alex Werra (Class of 2018) who converted 11 of 30 for a 37% rate. Rank’s twin sister Rachel Rank, scored six tries this season, becoming the first Hamilton player to score a try against DSHA A. and the first Hamilton player to score a pair of tries against their A squad in a single game. Junior Ronny Ruedinger also added six tries for the team, and junior Grace Farrell has proved to be a reliable tackler and stallwert defender. Farrell became the first Hamilton player to earn all-state honors playing primarily from the flank position. Senior Brenna McLay also provided grit on both sides of the ball. She became the third second row player to earn all-state after the duo of Savanna Thorne and Sydeny Raymond (Class of 2018) won it in 2018. Junior twins Jasia and Camille Torres became the first Hamilton wings to earn the distinction since Lauren Leonardi (Class of 2018) in 2017. Jasia had four tries, and Camille scored three.

Because of the pandemic, no all-state players where selected in 2020.